If you would like to be added to a list to be notified when new information has been posted,
click the following to use your computer's email program >>   email   (or type in contactus (at) prophecyanalysis (dot) org  within a free email program account).
Your info is never shared with anyone.....period.

This site is optimized for best viewing with Mozilla Firefox browser.

The only thing on the earth that corresponds to this description is the Great Pyramid of Giza in Egypt. Proof of this is shown as follows.

The analysis begins with the meaning of the "Great Pyramid of Giza" -- it means the "Great Pyramid of the Border" in English. The lines created by two diagonals of the Pyramid (northwest and northeast) encompass the Nile Delta. In ancient times, the Great Pyramid was at the boundary where the cultivated land touched the desert. This plateau was called Giza, or Gizeh (an Arabic word for the edge or border). Interestingly, the Great Pyramid of Giza is located in the precise center of all the land area of the world, equally dividing the earth (the 31 degrees 9 minutes meridian east of Greenwich is the longest land meridian, or longitude, and the 29 degrees 58 minutes 51 seconds north latitude is the longest latitude.  Additional information regarding the geographical location can be found on the "Decoding Pyramid" page here.

The clincher, and amazing fact, is that the Great Pyramid of Giza's height, in Pyramid inches equals 5,449 inches (to the original summit platform)!

This is too amazing to be coincidental. For clarification, 25 Pyramid inches = 25.0265 British inches. The builders' unit of measure for the construction of the Great Pyramid was the Egyptian Royal Cubit, with the Sacred Cubit being used as the predominate linear unit which equals 25 Pyramid inches.

The distance from the Pyramid's entrance through to the furthest point of the inside passages and chambers is also equal to 5,449 inches. 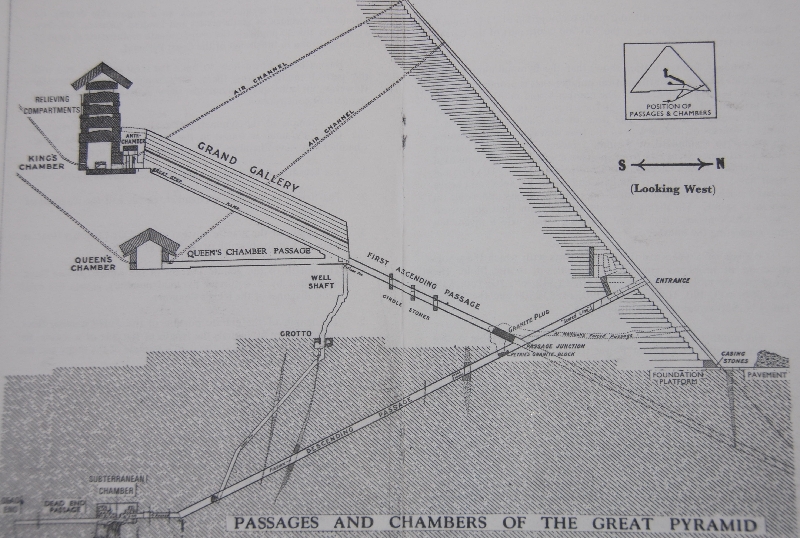 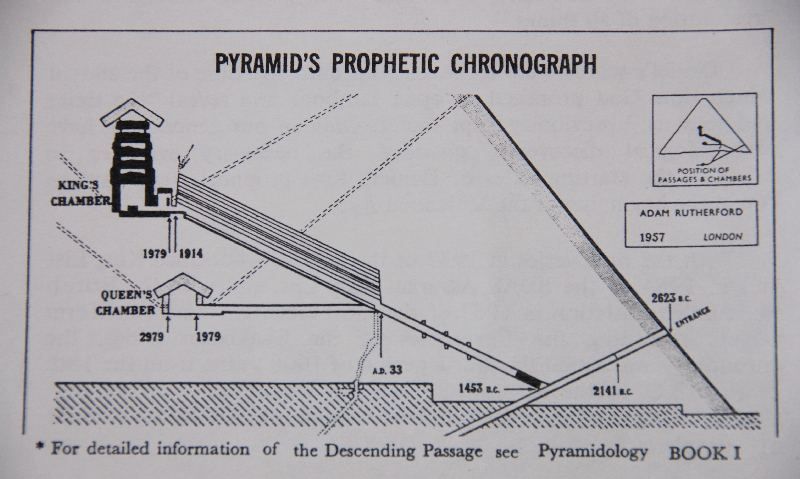 Note that the year 1914 is emphasized at the end of the Grand Gallery.  In 1914, World War I was declared, and Russia launched its
program to persecute the Jews (100,000 were killed on the day they launched that program).  For other events that happened on that same
calendar day ("Amazing Dates"), click here 9th Day of Av.

In 1929, evidence of apostle Paul's visit to the people of Greece and Corinth was found when an interesting stone was uncovered. Archeologists discovered a 1st century AD pavement stone in Corinth that can still be viewed today.  It contains the following inscription:

"Erastus in return for the office of public works commissioner laid this pavement at his own expense."

Erastus is mentioned three times in the New Testament.  In Romans 16:23 (KJV): Gaius mine host, and of the whole church, saluteth you. Erastus the chamberlain of the city saluteth you, and Quartus a brother.  In the ASV & AMP Bibles "chamberlain" is translated as "city treasurer."  Erastus is also mentioned in Acts 19:22 and 2 Timothy 4:20.

In addition, in 1898, archeologists discovered the remains of an ancient Jewish synagogue in Corinth, finding an ancient piece of limestone that was carved into it (translated, of course) "Synagogue of the Hebrews" along with another hunk of limestone with three Jewish menorahs (lamp stands) carved into it and per some estimates appears to have been part of a doorway to the synagogue that dates back, by some estimates, to the 400s A.D., and by other estimates dates back to the 1st century A.D. In either case, it is evidence of early Jewish presence in Corinth.

In 1961, a limestone block was found in Caesarea (in Israel) that has an inscription which dedicates the stone to Tiberius Caesar Augustus and refers to Pontius Pilate as Prefect of Judaea.  The stone/block is dated to 26-37 A.D.

The Dead Sea scrolls are the oldest Biblical manuscripts in existence, and are kept at a museum in Jerusalem in vaults. They were hidden in desert caves for more than 2,000 years. In the winter of 1947, three Bedouin shepherds/herdsmen were on the road near the Dead Sea in Qumran. One of the Bedouin shepherds wandered away from the others and threw a rock into a cave and heard the breaking of pottery. He climbed into the cave and saw rows of mostly broken jars along the wall. But, some were intact. He was the first known person to see these scrolls in over 2,000 years.

By November 1947, the book of Isaiah was discovered which was almost completely intact, a 24-foot long scroll – written only about 500 years after he spoke those words. It is almost identical to the book in the Bible we have today. (For readers who are unaware, Jewish scribes were required to continually re-copy manuscripts over time with absolutely no mistakes. If any mistake was made by the scribe, the copy was destroyed.) Another manuscript had 19 columns of a detailed plan of a prophetic 40-year war of the children of light against the children of the darkness, the final battle, when good triumphs forever over evil.

In February 1948, four more scrolls appeared. On May 15, 1948, the state of Israel was proclaimed, and a state of war was declared by its Arab neighbors. Seven months of war followed and left Jerusalem divided and the Qumran caves into Jordanian hands. Then archeologists began returning to the cave site. Many Bedouin, deprived of their occupation as smugglers, turned to archeology with enthusiasm. Over the next four years, more than 100 manuscripts and tens of thousands of fragments were dug out of more than a dozen caves. Unfortunately, often the Bedouins were there first before archeologists and legal excavators. To multiply profits, the Bedouins started to break up manuscripts into pieces. In order to prevent this damage, the Jordanian department of antiquities set a price of one pound per square centimeter. This strategy was so successful that a flood of material reached them, down to the smallest fragments, causing the museum vaults to overflow. But then, funding got depleted. As a result, the museum offered various international organizations to “buy into” a piece of the action, as it were, with the understanding that when studies were completed there would be a distribution of the antiquities. The job of piecing together scrolls that were not mostly intact was a very manual and painstaking task.

In 1952, an unusual 23-foot long copper scroll (in relief form) was obtained – the only scroll not on leather or papyrus. It listed treasures from a Jewish temple. It is said that King David was buried somewhere under Jerusalem with a huge amount of gold and other treasures – meant to be undisturbed until a time far into the future. It was artfully constructed so that it was hidden from view. Well-known historian Josephus (37-100AD) claimed that king David was the richest of all kings, meaning that king David’s treasure was greater than Alexander the Great – who seized about 7,000 tons of gold. Also per Josephus, this treasure was only accessed two times. Once in about 150 BC when the king of Syria seized the city and the high priest took 3,000 talons of silver to pay him to leave, and he left. The second time was when king Herod sent some of his men to extract some of the wealth of the tomb, but a blast of flame filled the chamber and drove Herod’s men back. Two guards were killed and the other soldiers refused to re-enter the tomb even under penalty of death. Then Herod closed off the tomb and put a monument up to prevent anyone from entering it. When Jerusalem was destroyed in 70AD and the Israelites were scattered, likely the location of the tomb was buried under rubble and the knowledge of location was lost over time.

In June 1954, a Wall Street Journal advertisement offered for sale 4 Dead Sea scrolls dating back to at least 200 BC. These ended up being displayed in a museum in Israel. The price was $250,000. The last of the scrolls was written in ancient Aramaic.

In 1960, from out of cave #4, many fragments were assembled and photographed by the team of 8 men that originally organized and were at the Rockefeller museum on the Jordanian side of the border. Cave #4 alone brought forth 15,000 fragments from about 500 texts and scrolls. (Over the following 35 years, only 100 texts had become published.

In June 1967, the Six-Day War broke out, and on the 2nd day, Israel took control of the Rockefeller Museum. Soon after they came into possession of the 8th scroll, called the Temple Scroll, a non-Biblical scroll, with a length of 28-feet long – the longest scroll found. They found about 800 scrolls in addition to thousands of fragments. But, they were shocked to find many pieces disintegrating from a lack of preservation facilities. The scrolls contained many multiple copies of the Old Testament books we have today except for Esther.

By the 1990s, there was mounting pressure from the international community to publish the discovered manuscripts. A deadline of 1996 was set for all editors to finish their work.  Today, there have been some books published.